This was a more ambitious launch day than previously, with 2 flights and 3 payloads.  Also it was the first time I had put items outside of the payloads to photograph, and the first time I’d used hydrogen.  It was a joint launch with fellow “balloonist” Anthony Stirk who had flown once previously plus he helped on the James May Man Lab show when they flew 2 balloons, one with hydrogen.  We also had the help (vital it turned out) of another enthusiast Ed Moore.  Here we are after the payload stand fell over!

First launch was of the “Buzz” payload (not to be confused with the Buzz Lightyear toy that hitched a ride later on the “Cloud” payload).  This was an attempt of the amateur world altitude record, using a tiny payload weighing 50 grams, underneath a fairly large balloon with hydrogen.  I was hoping this would at least exceed the 41km of my current UK record, and in theory (with a lighter payload and hydrogen vs helium) it should at least have a chance.  Here’s Ed holding the balloon.

And here I am launching it.

We didn’t immediately chase this balloon – the plan was to launch the second balloon first, chase that (it has cameras so is a lot more valuable) then go and collect Buzz after.

Cloud also had some other extras.  First was a soft toy Buzz Lightyear.  NASA have put a Buzz Lightyear into space, on board the Space Shuttle and then the International Space Station, but even they didn’t put him outside into space!

Second was a Radiometric logo (Radiometrix make the radios that almost all amateur balloon flights in the UK carry).

With both payloads completed, the balloon was inflated and everything tied together by Ed using his super-strong knots (more on those later).  We then walked into the launch field with the payload train strung between us:

After the launch we packed the cars then went back to my house to quickly check online and to plan the chase.  We had 3 cars – mine with Julie, Anthony’s with Ian and Katie, and Greg was in his own car.  The first two were equipped with radio receivers to help with the tracking, and in my car I was using my LCD dash display for the first time, neatly (or otherwise!) sat in an air vent:

Predictions for Ava/Cloud were for south of Guildford, so we chose a likely place and set our sat navs for there.  Anthony’s took him through Bracknell whilst mine took us via the M25.  En route Julie and I checked the live prediction and that said it would be closer to Dorking, but we opted to stay with the original plan and meet Alistair and the others before  getting a new more accurate location.

Meanwhile Ava/Cloud and Buzz rose as with their ascent rates very close to our targets.  Unfortunately though Buzz’s balloon burst at a distinctly unimpressive 27km, much below an average flight let alone an altitude attempt.  Worse, during descent it stopped transmitting so at that point I knew the payload was lost.  Ava/Cloud though continued to rise.  And rise. And rise.  Eventually they reached the #6 spot in the UK altitude table, not quite the highest for a photographic flight, but I believe it’s the highest carrying an external object (i.e. the Buzz toy).

South of Guildford Julie and I found a spot to park and wait for Anthony who was a few minutes behind us.  Checking the predictions and the map we then set a new destination south of Dorking.  I led using the LCD display to tell me where the payload was relative to our cars, whilst Julie checked on the prediction on her tablet.  As we got close to the expected landing point the payloads were just over a mile away and closing in.  We turned off the A24 to find somewhere as close as possible to the landing spot.  The road ended at a private drive next to a field, so Anthony and I jumped out to look up into the sky, then he spotted the parachute heading towards the trees nearby.  So we jumped back in our cars and tried to find a parking spot as close as we could.  From my LCD I saw that we were only 200 metres or so from the payloads, and a mere 300 metres where we parked.  The payloads were down by then and the signal from them still strong – a sure sign that they were not actually on the ground!  So we took the telescopic pole from our car, plus receivers and aerials, and set out on foot.  Anthony took his phone with him, running the car tracking app, so our path on foot was tracked online (bottom-left is where we watched the parachute from; top-right is our parking place; bottom-right is the path we walked to the payloads).

When we got to the landing area I spotted the chute at top of a tree: 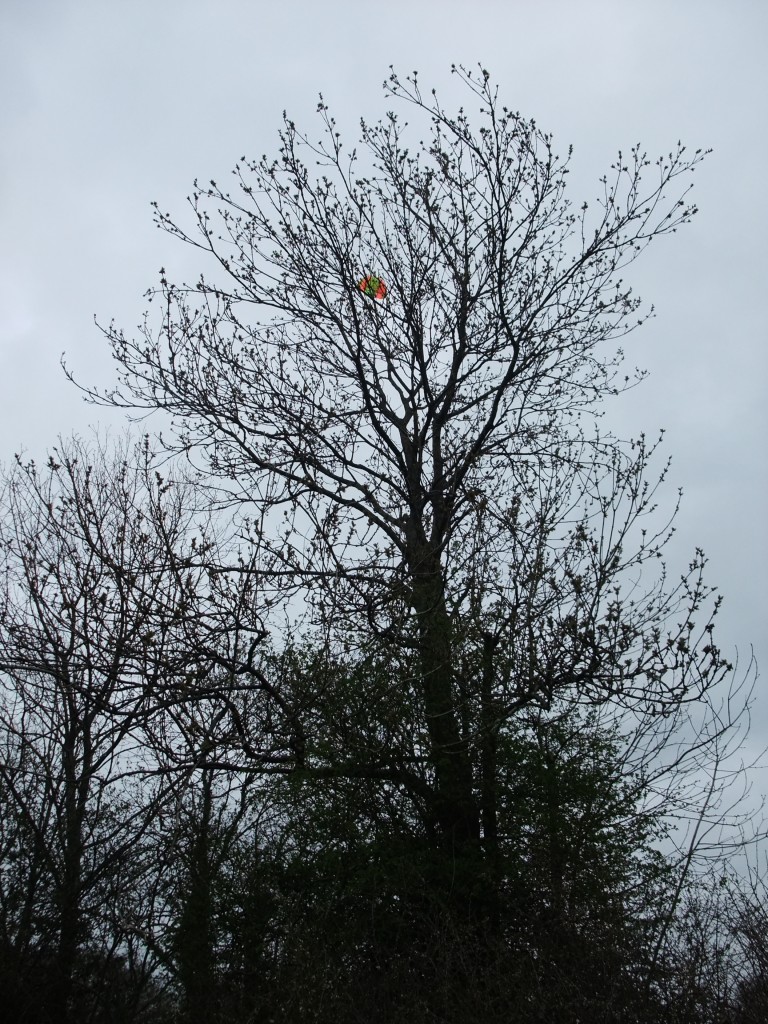 Ava and cloud were both hanging below, with cloud looking to be almost within reach (but wasn’t as the ground was much lower below the tree than it was where we were standing). Buzz was above with the main support line going past him, so he’d been facing down during descent!

We soon decided that we needed more items from the cars to get these payloads down.  So Anthony and I headed back for scissors, line, duct tape and hooks.  Returning to the landing site we put a hook onto the telescopic pole, then pulled Cloud down to safety.

Ava though was too high to be pulled down, even with 2 of us pulling as hard as we could.  Ed’s knots performed amazingly well – it would have been a disaster if one had failed below either of the payloads. Ian tried climbing up a tree but that wasn’t enough either:

So instead Anthony tapes some scissors to the pole, added a string for “control”, and with Ava pulled as low as possible positioned the scissors thus:

So with both payloads recovered we set about checking our cameras.

With our payloads and cameras safely in our hands, we went back to the cars and headed into Dorking to find some food. Pub after pub had either stopped serving food that day, or hadn’t started yet, or their chef was off sick with food poisoning, but eventually we found an Indian restaurant that was about to open. “A pile of poppadoms and 9 pints of lager” sounded very tempting but some of us sadly had to drive afterwards! The food was very good and of course we had some photos and video to look at!

All in all, a great HAB day! Thanks go to all my helpers, but in particular my wife Julie for coming out despite being unwell, to Anthony for coming all the way down from Yorkshire with a large cylinder of hydrogen in his car, and Ed for tying such impressively strong knots! Here’s a taster of some of the images, but for more check these links: