Heston, We Have A Potato

This fun project started with a call from a TV production company who were working on a series for Heston Blumenthal. They’d heard that I fly the Raspberry Pi and wanted to include it in their Pie episode. The idea was to fly a potato as that was the first vegetable to be grown in space.

Fast forward a few weeks, we had the challenge of finding a day that had good wind predictions and good weather, and would fit in with the filming schedule and Heston’s diary. Not easy, as you can imagine. However we did find such a day, with Heston available throughout, and I prepared a payload to fly. That needed to contain 3 GoPro cameras, including one looking down and one out sideways, plus a Raspberry Pi to send telemetry and live images from the flight:

On top of this I placed some foam blocks to hold everything in place, then a further camera to record the balloon burst:

On launch day, the first to arrive was Jon who’d made this wonderful retro-styled rocket, piloted by a King Edward with a familiar face:

We worked together to mount his rocket to my payload, using a shaped piece of balsa wood fixed to the underside of each:

With the main payload finished, plus a spare back tracker, we waited for everyone else to arrive. Julie served bacon butties to all. Heston was a bit late, and his bacon was sad and solid by then, but he still ate it :-). Here he is posing next to my BaCoN shirt 🙂

After this it was time to go and launch. The film crew were very unobtrusive so I found it easy to just get on with the launch, chatting with Heston and explaining how it all works.

There was little wind so the launch was easy. After feeding up the balloon and payload …

… I just stood back to let Heston do that to camera:

Next job of course was to chase the flight. The prediction had it going from Berkshire to Essex, so there would be little chance of getting there before it landed even without a film crew so slow things down!

We saw some great images throughout the flight from the SSDV system, and had good telemetry also. Here’s an image (from a GoPro) during the flight: 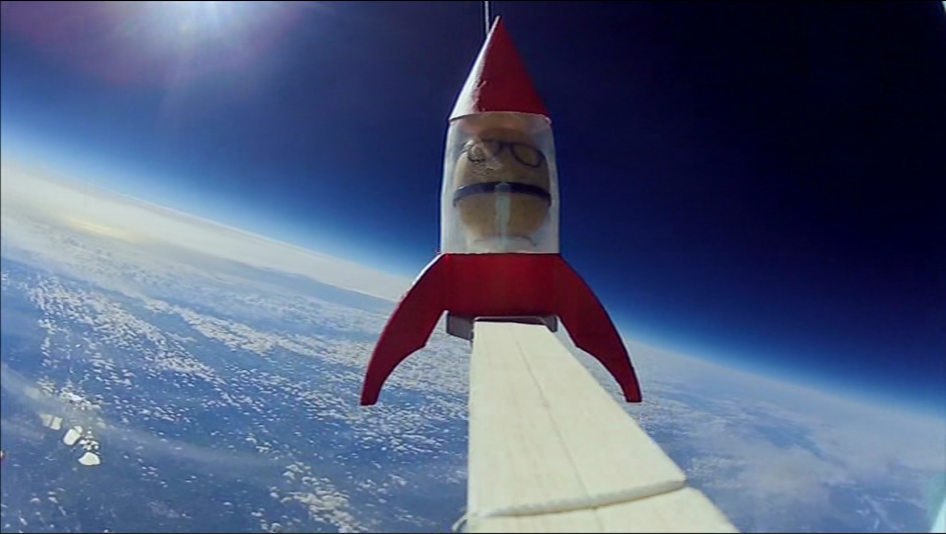 When we got to the area, some time after the flight landed, we got a very strong signal from near the road, and my direction-finder swung round rapidly as we passed the landing spot. Someone in one of the other chase cars saw it in a field as we passed! We then stopped to check maps and find the easiest way to get close to the payload. It was then a short drive to get to the field, where we donned wellies and made our way to the potato before it took root!

Heston had gotten more and more attached to the potato during the day, and he genuinely seemed unwilling to mash the thing up by the time it was recovered!

Flight video from the show

Heston talking about the flight on Chatty Man

3 Responses to Heston, We Have A Potato