This was a simple flight, partly to try out a fisheye camera for the Pi Zero, partly to try streaming the launch to YouTube from a new camcorder, and partly to get a launch in while the weather is good for it!

I wrote previously about how to stream to YouTube from a D-SLR.  That technique used the USB connection from the camera, but better quality is possible by feeding the HDMI output from a suitable camera into a HDMI to USB video capture device.  However, many DSLRs superimpose focus rectangles and other items onto their HDMI output, which is not what we want.  For some Canon DSLRs (but sadly not my EOS 760D!) some third-party firmware can make the HDMI output clean, so I needed to find another camera to use.  One option was to buy a cheap/older Canon DSLR, but in the end I opted for a Panasonic V160 which has a 38x optical zoom, is small and very light (perhaps too light!), and can accept a larger than standard battery for longer run time (or can run from USB power).  I paired this with a cheapish fluid head on a heavyish tripod.

For capturing the HDMI feed, I bought an AverMedia HDMI to USB capture device which had HDMI in and out sockets, and a USB connection to a PC.  It’s really very very good, once you get past the rather odd software user-interface which wants to be a game rather than a program.  The software can stream to various services including YouTube, and will authenticate to YouTube so you don’t have to mess around with URLs or video ID codes.  Provided you have the uplink bandwidth (which for me means using 4G rather than the pathetically slow FTTC connection) then streaming is very smooth indeed, mainly as a result of the device doing H.264 compression internally. I streamed the launch live to YouTube, and you can see the results here in my channel.

I made the tracker a few weeks ago, similar to this design but using a fisheye camera from Pi Hut, using an 868MHz LoRa module so I could send fairly large images down during the flight.  As the range of these wideband transmissions is much shorter than for more normal settings, I set up a LoRa gateway connected to a high-gain Yagi antenna atop an ex-Army 12 metre Clark mast.  This gateway uplinked messages to the flight, for re-sending any missing image packets, and separately another gateway listened only, from a 1/4 wave antenna through a filtered pre-amp. 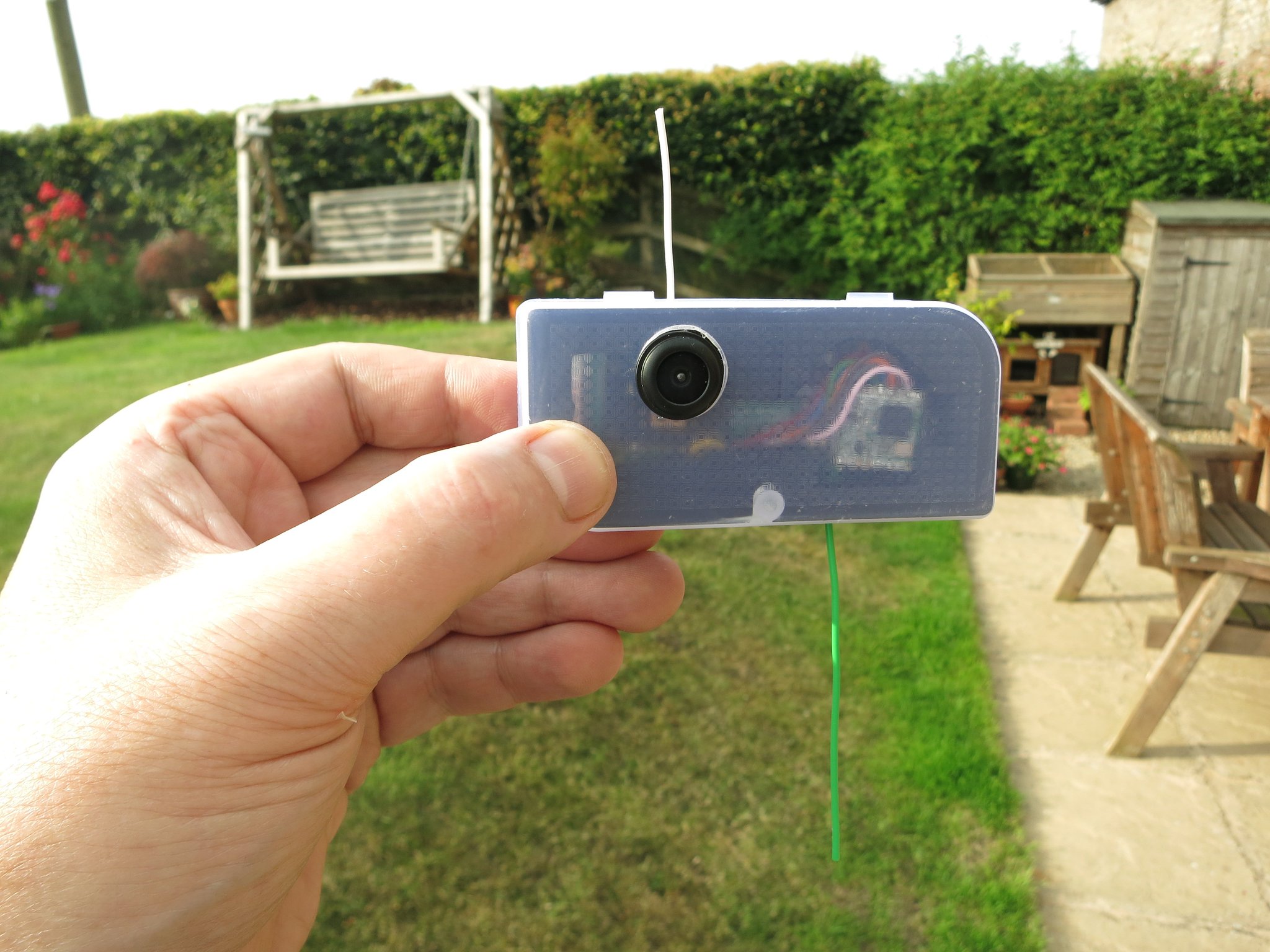 For the flight, I removed the tracker from that case and placed it inside a foam plastic box from Hobbycraft, powered by a cheap AA*2 powerbank.  However, this combination failed to gain a GPS lock, so I swapped the powerbank for a 4*AA model and used 2 cases taped together so I could keep the powerbank away from the GPS aerial (1/4 wave wire as in the photo above).  The result had no problem at all getting a good GPS lock with plenty of satellites, however the weight went up from 95g to 195g.  Balloon was a 1600g Hwoyee with hydrogen.

The launch was delayed by the GPS issue and wanting to wait until I had some help, by which time the wind had gone from “nothing at all” to “mainly blustery”.  So filling the balloon was fun, as can be seen on the video, and I had to take the balloon down to near some trees before launching it.  After that, the flight itself went smoothly, and pretty close to the prediction, albeit a bit higher finally bursting at 43,014 metres (I expected 41-42km).

We tracked the flight in our chase car, both via the live map and also with direct reception using the 868MHz LoRa gateway in the dashboard.  As I mentioned, range on 868 isn’t that good, so for a long time we had no direct data or images, but once we got in range reception was very good.  We were about 10 minutes away from the flight when it landed, and got our last position when it was at about 775m altitude.  We then tapped the predicted landing position (as sent by the tracker itself) into my phone and drove up to the landing spot easily.  When we got there, Julie first spotted the payload and parachute just metres away from the road.

Even better, there was an open gate just behind where we parked, so a very very easy recovery.

Finally, some photos from the flight.