For this flight I joined forces with Steve Randall – one of the earliest HAB hobbyists in the UK, and the most prolific launcher; between us we’ve flown well over 200 weather balloons. But experience doesn’t mean that things always go to plan, as we shall see …

The aim of the flight was to try out one of the new range of balloons from Hwoyee, and see how high they can go. They are relatively large balloons, and are double-skinned: to make them fit within standard size filling rooms they have an outer “auxillary” balloon to maintain a spherical shape when inflated, with the main balloon inside of that, joined to a filling valve at a double neck. For this size of balloon, the outer one bursts at around 12km allowing the inner balloon to take over for the rest of the flight.

These balloons are claimed to get as high as 50km, if conditions are right, which is 5km higher than the current amateur record (held by Steve). We didn’t think that altitude was likely this time, nevertheless for my tracker I used a GPS that, unlike the one usually used for HAB, works above 50km. I connected that to a Pi Zero, LoRa radio, Pi camera and 3 AAAs via a boost converter. Steve’s tracker was a new lightweight design of his, with a software mod so that it during advent it sends the highest recent position to transmit.

Filling these large balloons is a challenging affair. First, that’s a lot of hydrogen – around 11 cubic metres – so Steve wore fireproof clothing and we had fire extinguishers and buckets of water to hand. It took 3 cylinders so we had 2 changes during the fill. Finally, that large a balloon makes a big sail, so we erected a tall custom windbreak first.

To make the launch a bit easier, we used a relatively short payload line. That proved to be a mistake. As soon as the balloon was launched, the weight of the inner balloon pulled one side downwards leaving the filling neck, with payloads attached, halfway up one side. Further, the fact that both payloads together only weighed 130g, meant that the balloon had little to persuade it to remain upright. Evidence of the precarious arrangement is clearly seen on some of the live images … 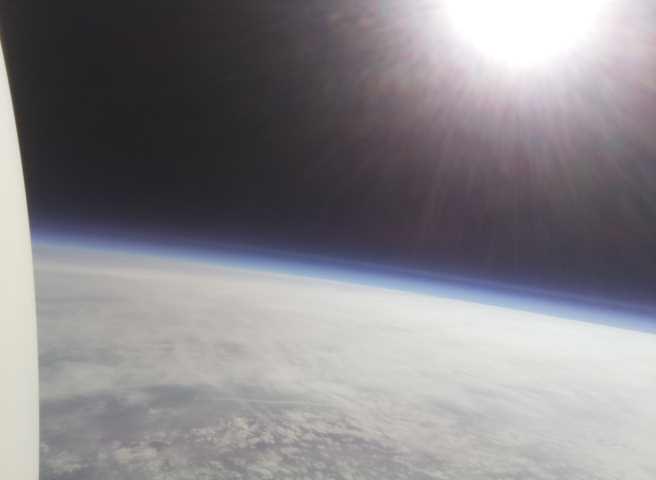 This was my first flight testing my new Android HAB app, which I had running on a new headunit installed in my chase car (lower device here; upper one is my old Pi-based LCARS unit tucked into a storage compartment).

One of the app functions is to speak interesting events over the car stereo, so we had a funny moment when it announced “Flight P T E 1 had been launched” at high volume, shortly after it had been!

Everything aside from the alarming turbulence was going swimmingly well – even the ascent rate which was high enough to prevent a sea landing – when the first problem happened – Steve’s tracker stopped updating its altitude, and started to send incorrect latitude and longitude values. We felt this might correct itself during descent, and besides we had a second tracker, so we weren’t overly concerned.

Meanwhile the live images often included the large balloon – both a novelty and a worry as we don’t want the payloads colliding with the balloon as either could get damaged.

Then my tracker stopped transmitting. Our assumption is that something broke physically due to the turbulence and short payload line, as that tracker has flown before with no issues. So we now had no updates on the flight position. Not good.  Here’s the last position we knew, with a prediction based on the balloon bursting at that point:

Never Give Up, Never Surrender

We did though have one tracker sending something. You can glean a lot just from the radio signal, so I tuned my radio to Steve’s tracker and just listened to the signal. The burst of a balloon is usual easy enough to hear as the payload the to spin during free fall; the radio signal isn’t omnidirectional so the spinning is clearly heard through a radio speaker. I sat listening and waiting, and wrote down the time when I first heard the payload spinning. Woo, a data point!

I also had the (errant) telemetry visible on my Android head unit, and I watched that hoping for the error to fix itself. Well, it almost did – the tracker suddenly transmitted the maximum altitude that it had registered during the flight so far. Woo, another data point!

Also woo – it beats Steve’s record!  However, with no corroborating data – i.e. no GPS history of the flight to that point – it’s not one I think we can claim.

We always use the excellent CUSF flight predictor before a flight, to decide what day (and sometimes what time) is best to fly, and then to decide on the best flight path (something which can be adjusted by changing the balloon size, parachute size and gas fill). It has another use too – to help locate otherwise lost flights. To do this, I entered the last position that I knew (from my tracker at around 36km), and the maximum altitude which X2 transmitted. For the ascent rate I started with the average that I saw early, and then adjusted that till the timings matched when I heard the burst. So those data points accurately (I hoped!) profiled the ascent.

Now for the descent. I waited till I lost audio from the tracker, and checked the #highaltitude chat room for when others lost it too.  Mine seemed to be the last anyway, so I used that time. Back on the predictor, I adjusted the landing speed till, at 7.5m/s, the landing time was shortly after the last time I could hear anything. So I now had a prediction to work from, and Julie and I drove there (over 80 miles, and around 100 minutes away) while Steve got on with another launch.  Here’s the final prediction that I made before setting off:

The landing area was west of the A12, so for convenience we aimed for that road then drive North to take us within 500m of the predicted landing point. I fully expected to spend an hour or so drinking round all they local roads on search of a signal, but amazingly we picked up a loud signal as soon as we got near the prediction! We pulled over into a layby and waited for a decode. Unfortunately that was still showing the wrong position. So…

It’s an old technique from when it wasn’t so easy to encode telemetry on a radio signal. All you have to do is use a directional aerial to get a direction to the radio transmitter, then do the same from another location. We did that, and got a position at the far end of the field we parked next to.

Walking along the side of the field, radio and aerial in hand, I could tell that the signal was coming from somewhere inside dense woodland. Filled with brambles. I ventured in but couldn’t get a definite position, couldn’t see the payload, and was get scratched at every turn. It seemed that the signal was coming from somewhere close to where the trees stopped next to a railway line, so I retreated and tried in the field the other side of the line. Again, triangulation was showing the payload to be near the edge of the trees, but we still couldn’t see it. With skin and clothes torn, and the light fading, we called Steve and decided to wait till the next day.

Checking on the map at the hotel, I saw that the payload was a mere 250m from the prediction. Let that sink in.  A 250m error, from a point 36km up in the sky, for a flight that reached 45km and travelled 50km horizontally after the last position till it landed. Stunning accuracy (within 0.5%) from the CUSF predictor!

Steve got to the area at first light, went through pretty much the same process that I did, and with the same results. We may go back when leaves have fallen and it’s potentially easier to see through the dense undergrowth, but for now the payloads are lost. So close yet so far!